A long history of innovation and a solid commitment to client satisfaction have made OTTO CANDIES the most trusted name in marine transportation.

It began with a simple request.

In 1942, Captain Otto B. Candies was asked to provide small craft support to an oil rig to clear water lilies from an access canal. Though a relatively small task, Candies attacked it with spirit and determination. The Captain’s efforts won him respect, admiration and a crew-transport contract with the Humble Oil Company — known today as ExxonMobil. 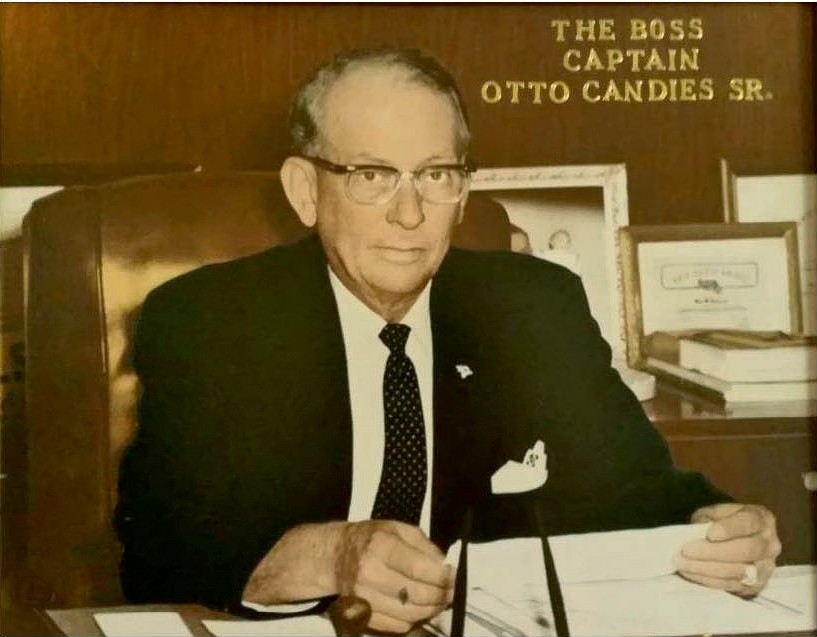 The CANDIES reputation for dedication and excellence spread as the offshore oil industry boomed. With solid business sense, Captain Candies expanded his fleet to match the growing demand for his services.

Today, as one of the nation’s most respected marine transportation companies, the CANDIES fleet continues to expand. The ability to provide cost-efficient solutions and a work ethic rooted in integrity have kept OTTO CANDIES in the offshore  industry spotlight as an unparalleled innovator.

The company was the first independent contractor to use ocean-going barges for deep-sea supply. By eliminating the need for large, bulky ships during transport, CANDIES was able to significantly reduce supply costs.

Another first, CANDIES vessels transported a complete production package from Houston to the North Sea, and was the first company to move a full refinery — delivering 6,000 tons of cargo a week for 72 weeks — from Houston to Puerto Rico. And, when NASA needed to ship its enormous Saturn V rocket to Cape Kennedy, it turned to CANDIES.

From critical logistics coordination and project management of ExxonMobil’s Hoover/Diana Development, to unprecedented crew transport in the wake of the Valdez grounding in Prince William Sound, CANDIES has earned a reputation for creative problem-solving and dogged determination with the most difficult tasks.

In Boston Harbor, CANDIES was charged with the complex task of sinking a commuter tunnel. The company modified a submersible barge and quickly completed the project. CANDIES vessels also were chosen to transport the Gorilla V, the largest jackup rig ever built, from Vicksburg, Miss., to Sabine, Texas, and tug three 25-mile sections of pipeline from Corpus Christi to a location 400 miles offshore.
In addition, OTTO CANDIES, LLC, has been certified under the International Safety Management Code since 1998 – four years before it was required.

Today, OTTO CANDIES, LLC, steers the same course that established the company’s outstanding reputation. The attitude of our management team consistently reflects the basic business philosophy of Otto Candies himself — to provide the best possible service at a fair price. No matter how complex and demanding the offshore industry becomes, CANDIES is well-positioned to accept the challenges of the future, and the company’s goal remains the same: To get the job done on time, on budget, safely and responsibly.

The standard by which excellence in marine transportation is measured.